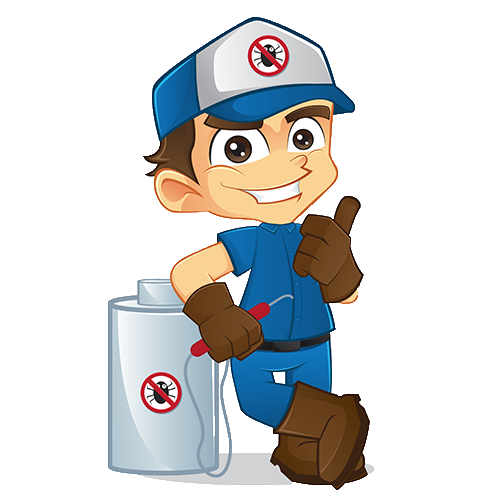 Get A Free Quote

It is important to note that the damage caused by termites & wood borers is significantly different & must be assessed by a licensed professional. Borer damage can be the result of an adult beetle boring into the sapwood &/or the heartwood of a timber. The female will then lay her eggs at the end of these galleries. Another result of borer damage is by the female laying her eggs into cracks or old flight holes. The larvae may then tunnel through the sapwood, moving closer to the surface of the timber to begin its pupil stage.

Certain types of borers have the potential to attack building timbers that have been in service for up to 20 years. Some species of borer only attack moist timbers that have been recently felled & will only continue to reinfest until this timber has been seasoned (timber dried to a stable moisture content of approximately 10 to 15%). Some borers will be sensitive to heat & will only attack floor & wall paneling avoiding the higher temperature areas such as the timbers in your roof void.

Today’s methods of milling timber often reduces the possibilities of attack as it is now a requirement in QLD & NSW that all structural timbers have no more than 25% of untreated susceptible sapwood. These changes to building practices have decreased the risk of attack to timber in service and reports of damage have become less frequent over the years. However evidence of borer damage may exist & it is for this reason that it should only be assessed by a licensed technician. 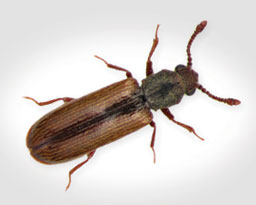 This beetle will vary in size from approximately 3-6mm attacking only hardwood timbers. The female will lay her eggs in the exposed end pores of a hardwood timber. After the eggs hatch the larvae will then feed on

This beetle is approximately 3mm long. The female will lay her eggs within cracks & crevices of the timber. After the eggs hatch the larvae will also come closer to the surface of the infested timber. They will pupate & later emerge as beetles causing round holes approximately 2.0mm in diameter. They will attack mostly pine timbers. They have been known to attack hardwood timbers but this is very rare. 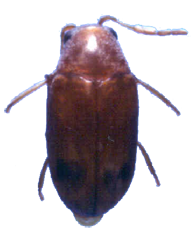 This beetle is similar in behavior to the furniture beetle however is it much shinier & wider. It will also only attack pine timbers. It is approximately 3mm long & 1.5mm wide. The female will lay her eggs within cracks & crevices of the timber. After the eggs hatch the larvae may travel great distances through the timber coming closer to the surface before their emergence. They will pupate & later emerge as beetles causing round holes approximately 2.0mm in diameter 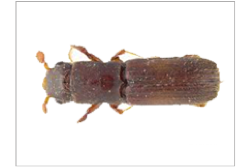 Adults will be approximately 1mm – 6mm. This beetle will not be found in the timber of your home as they prefer freshly felled timbers with a high moisture content. They will therefore die quickly in felled timbers as a result of the milling process due to lack of moisture. However it is mentioned as the female will bore a 1.5mm – 2.0mm hole into a freshly felled tree to lay her eggs. The adult will leave fungal spores on the walls of this hole as a food source for the larvae once it has hatched. The adult has also been known to remain at the entrance of this hole to maintain the humidity for the larvae & to protect it from predators. Often the timber around this hole is stained. This affects the timbers appearance but not its strength. These stains may persist through to the finished article after milling.

As you can see, there are many variables to consider when assessing borer damage. The above information only scratches the surface as there are many other factors to consider even down to the type of frass (borer workings) left behind. Sometimes frass simply does not exist due to the varying biology of borers. Borer biology, damage & behavior are significantly different between the species & must be assessed by a licensed professional.